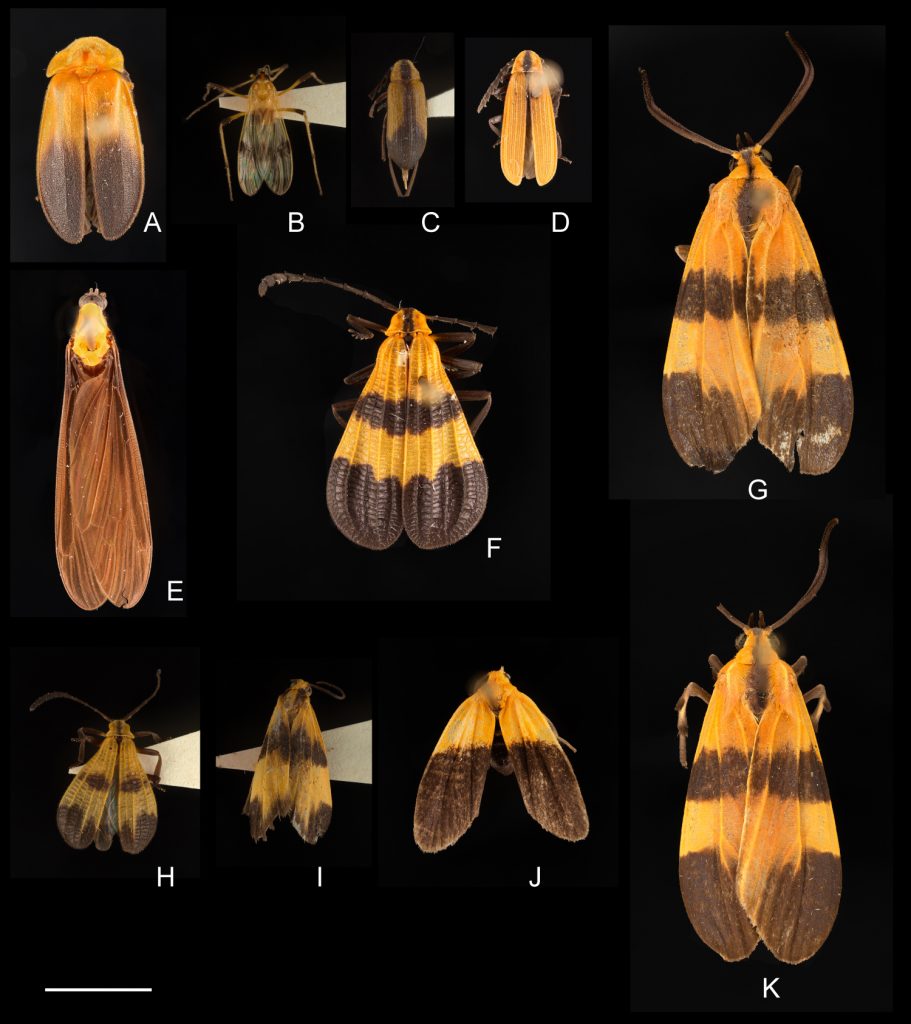 A few months ago, while browsing the unsorted material in the VTEC, Grant and I discovered this group of orange and black insects collected from a small patch of rainforest near Turrialba, Costa Rica, by Dr. Robin Andrews (Department of Biological Sciences) in 1966. The beetles, flies and moths are distantly related, and yet they appear similar with the same orange and black color pattern. The similarity is not by chance, but a result of convergent evolution by mimicry.

The insects are members of a mimicry ring with lycid beetles as the model species. Also known as net-winged beetles, because the pronounced veins in their elytra give a net-like appearance, lycids are toxic and defended with pyrazines and lycidic acid (Moore et al., 1990; Eisner et al., 2008). The veins, which are turgid and easily ruptured, contain the toxins that spill out when the beetle is handled by a predator. It’s been shown experimentally that the beetles are rejected by spiders, lizards, and birds (Darlington, 1938; Eisner et al., 2008).

Historically, it’s likely the lycid beetles were on the (evolutionary) scene first. Over time predators learned to associate their distinctive coloration with being noxious, a.k.a. “aposematic”. The predators’ perception of prey as toxic may also include the smell of the beetle too since pyrazine is aromatic. Quoting Eisner et al. (2008), the implicit message of pyrazine may be, “desist, lest you are willing to risk an unpleasant mouthful”. This cocktail of defense chemicals including a mixture of a highly toxic chemical and an aromatic chemical is also known in other insects (Gullan & Cranston, 2014).

Later in time, those flies and moths that tended to appear more similar to the lycids persisted in nature. If the lycids and their aposematic signal was so effective at deterring predators then other species—even if they were non-toxic—would converge as a result of mimicry.

It is interesting to note the two larger moths labelled G and K have very accurate coloring to match the beetles including a black stripe in the middle of an orange pronotum; whereas the smaller moth, labeled I, is less precise because it has an orange stripe on a black pronotum. This is because predators are less likely to attack smaller mimics as they are less profitable as prey items (Penney et al., 2012). Therefore predators exert less selection for accuracy of mimic prey.

This entry was posted in Uncategorized and tagged beetle, natural history. Bookmark the permalink.

3 Responses to Curiosities from the cabinets: Lycid beetle mimicry ring