The Paulson parasite collection was orphaned to the entomology department from Dr. Paulson, brother of Dr. Sally Paulson. It is fascinating, to say the least, composed mainly of endo- and ectoparasites collected from various small mammals, with dates on the specimens ranging from the 70’s to the 90’s. However, the jars and vials in the collection not only contain the parasites found on and in the animals, but oftentimes the entire animal itself or, strangely enough, just the animal’s baculum or stomach. In fact, we found that a large amount of the vials in the collection were stomachs from small mammals, such as voles and squirrels, ranging from fully intact to completely deteriorated.

Katy Lawler, an undergraduate researcher in Dr. Marek’s lab, refilling vials. Pictured up close are vials of stomachs of the eastern chipmunk. 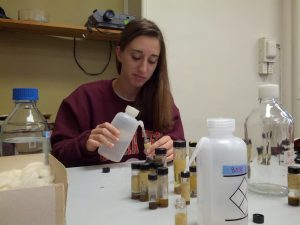 Over the course of the semester, Katy Lawler and I took on the task of going through and performing curatorial work on the Paulson parasite collection. Our main goal was to help to preserve this extensive collection for future study. The collection is full of great specimens that have the potential to be very useful in future research, but it was in desperate need of some TLC. Many of the specimens in the vials were either already too dried out to be rehydrated or were very close to being at that point. The collection was contained in three large cardboard boxes, with most of the vials organized in smaller boxes placed haphazardly inside and others just floating freely. The vials that were organized into smaller boxes were usually grouped by what species of animal the specimen was taken from. None of the vials were identified by what parasite was actually present. 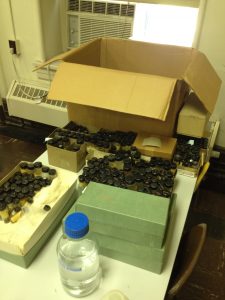 One out of three large cardboard boxes containing the Paulson parasite collection. 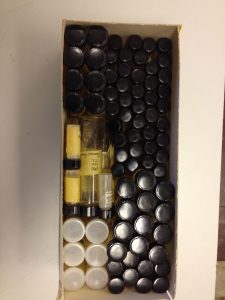 Smaller box, containing specimens all from the red chipmunk.

We took the time to go through every box and top off the vials that could be refilled (determined by at least some moisture being present but with low alcohol content) with 80% ethyl alcohol. After going through an entire smaller box of vials, we specified on the side of the box the number of vials topped off over the total number of vials in the box, the alcohol used, and the date this was done. In many cases, an entire small box might be filled with stomachs from Tamias striatus, the eastern chipmunk. In other cases, a box might be filled with jars containing different life stages of Microtus pennsylvanicus, the North American vole. Other specimens found in the vials included fleas, lice, nematodes, and bot fly larvae. 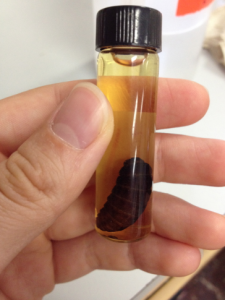 Working on this collection presented exciting, albeit often unpleasant, surprises at every opening of a new box. We were quick to share with one another whatever astonishingly foul smell or strange specimen we each came across.

As we went through the collection, we noticed that many vials were labeled with numbers as though they were part of a catalog. Upon searching in the three boxes for some sort of record of this catalog, the only thing we found was an old floppy disk, the contents of which we excitedly opened only to find several funny gifs.

It is evident that lots of time and skill went into compiling this vast collection, which makes it surprising that it had become so disorganized. While the collection is now in much better shape, it still could use more work, including photographing and documenting the specimens present. We plan to try to contact Dr. Paulson to inquire about the mysterious missing catalog and to get more information on the collection.

This entry was posted in Uncategorized. Bookmark the permalink.